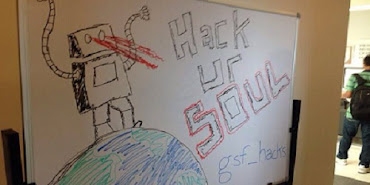 Last month some of my friends and I went to a hackathon organized by GSF India. This hackathon was particularly interesting since almost all the participants were amongst the top ranked from Hacker Earth and thus a tough competition was expected.

The participating teams had to choose one challenge to compete. Our team chose shine.com challenge which involved improving their registration system in an innovative manner.

Shine.com is a website for job finding. We could easily see problems with the registration system, which could be solved. What we built was a utility which involved an IVR, Voice Recognition system, Resume Parsing (PDF/DOC) and an Android App for smart phones as well as not so smart phones.

You can find the code on Github

The good thing is that our hard work paid off and we won the challenge. What’s better than a 2 days of coding with free food , infinite Red-Bulls, a cool tablet and a little cash. Well other than that we also got a cool sipper and a t-shirt.